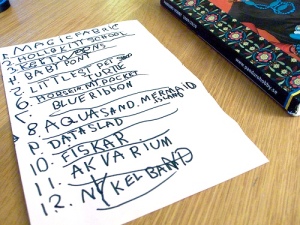 Like it or not, the holiday shopping season is upon us.  Latest reports say that times may be tough, but shoppers will be buying toys and clothes for kids this holiday season, and only a few things for themselves.  They’ll also be looking for a good value and lower priced items.  Says Lisa Harnisch, Toys R Us VP, there are continued concerns about the economy, but toys for kids are “the last thing they [parents and caregivers] will cut from their budgets”.

Our family is no exception.  While we are fortunate to have income coming in, we’re watching every penny, nickel, and dime.  Christmas in the past usually meant a wii, Nintendo DSi, or iPod, along with a bunch of toys.  Last year, and this year, we are spending much less.

Every gift has to count – it’s a delicate balance between bringing joy to your child’s heart, and not overtaxing your wallet.  Since we’ll be buying less toys overall, getting the “right” toy – one your child is wishing for, and that you can afford – is important.

With that in mind, and to give you a few ideas, here’s a look at the top and bestselling toys lists from Toys R Us, eBay, Amazon, and CNNMoney.

There you have it – lots of great gift ideas, lots of price ranges, and lots of boy or girl targeted items to choose from.  Start your planning!

P.S.  In the next week or so, I’ll be updating my What’s Hot:  E rated video games for kids list.  One recently released game sure to make the list is Kirby’s Epic Yarn – here’s a teaser:

Made by Blip Toys, Squinkies are small, soft and squishy plastic toys that come in a variety of characters, including miniature animals and people (kitties, puppies, babies, ponies, and friends) and themed accessories like birthday cakes and princess.  Cute and fun, each Squinkie comes in a small, hinged plastic bubble ball – sort of like a gumball machine toy.  Squinkies can be used as a pencil topper, and are portable, collectible, and tradeable,.  There are also a number of Squinkie playsets that are bubble dispensers, like a gumball machine, along with a tote case to carry your collection in.

There is also a Squinkies Surprize Inside website, where you can track your collection online, and find fun activities including coloring sheets, mazes, and dot to dots.

Reviews for Squinkies are very positive, most saying kids love to play with and collect them; some say due to Squinkies squishy nature, they can be delicate and parts can break off.  Also, for the bracelet and ring sets, the Squinkie figures don’t always mount securely, and can easily fall off and get lost.

Recommended for ages 4 and up.  Due to their small size, Squinkies are a choking hazard, and not recommended for kids under 3.  So, if your child still likes to put everything in their mouth, this is not the toy for you.

According to a recent article on Reuters:

“The hottest toy of the 2010 holiday season could be a cheap, small, squishy character packaged in a plastic bubble reminiscent of grocery store toy machines, said toy experts Jim Silver and Christopher Byrne.  ‘Never underestimate the power of cute,’ Byrne said, in explaining why he thinks “Squinkies,” the $7 collectible capsule toys which double as pencil-toppers, can emulate the success of last year’s runaway hit Zhu-Zhu pets.”

Also, according to CNBC:

“Time to Play magazine has taken a crack at what it suspects will be the hottest toys of the 2010 Christmas holiday season, and already, for at least two of them, we are hearing reports that supplies are scarce.   The two are: Squinkies from Blip and Zoobles from Spin Master. Both toys, which have made other hot toy lists, begin selling at extremely low prices. Sets of Squinkies start at as low as $6.99, while some Zoobles cost as little as $4.99. They are made to be collectible, which is great for parents on a budget, who can buy as many—or as little—as they see fit. Both companies said they were already looking for new ways to ramp up manufacturing and increase supply, but it looks like the hunt will be on for these items.”

My daughter has wanted Squinkies since her birthday in July, but they’re constantly sold out at our local Target.  When I read in CNN Money that Squinkies is predicted to be “the standout toy of the year and possible successor to last year’s Zhu Zhu pets craze”, I knew I wanted to get her some.  And, I wasn’t going to wait until the last minute, like I did last year with Zhu Zhu Pets.

I started looking for Squinkies online, and found they are entirely sold out at Toys R Us, and are sold out except for 1 bubble pack at Target.  All the different sets are available on Amazon, but for higher than retail – for example, the 6 bubble packs retail for $9.99 each, but on Amazon are priced from $15.96 – $19.98 each (although they are eligible for Super Saver free shipping).

Next I checked out eBay.  And found 22 piece lots going for almost $500!  Bubble pack series 1 – 6 lots were selling for around $100.  I was able to find a Buy It Now for $78, with free shipping, which I quickly purchased.  The funny thing was, I made a very early morning trip to Target the next day, and they actually had Squinkies in stock!  Ironic, I know!  I got a couple additional small sets for gifts, and another set of the 6 bubble packs to sell on eBay myself.  The lesson here being – keep checking the retail stores in your neighborhood, particularly just after opening, after restocking, and you might  just find yourself a set at retail price.  If you get tired of continually checking and coming up empty handed, your next best bet is eBay – but look carefully, as there is a wide variety of price ranges.  Good Luck!

PS:  Just FYI – according to the Squinkie website, new Squinkies are coming November 2010.

I want to see stuff about: