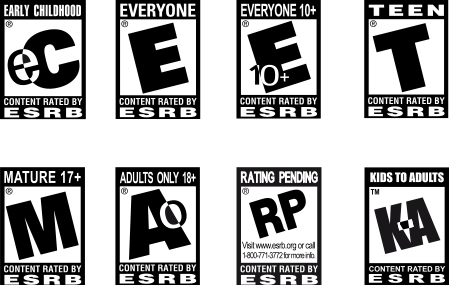 There’s only 46 days left until Christmas, according to eBay’s new countdown-to-Christmas clock – time to get cracking on holiday shopping plans.  Here are my latest lists on the top selling and top rated video games that are appropriate for kids – all with an ESRB rating of E or E 10+.

The biggest news in gaming right now is Kinect, Microsoft’s motion and sound sensitive, controller-free device for the Xbox 360.  Nintendo Wii and Playstation Move both require a controller in your hands, but with the Kinect, YOU are the controller.  For info on Kinect, check out my post here.  The other big Xbox news is Call of Duty: Black Ops, but as that’s rated M, it’s not a game my kids are allowed to play.

There are an amazing number of good games just released, or scheduled to be released for the holiday season, with ESRB ratings of E or E 10+.  Games that I’m excited about include:

“I’m very impressed with the programming, thought and imagination that went into this. Wii has taken the potentially boring concept of party games and created something quite wonderful, not to mention fun.”

We’re long time Kirby fans, and with an 8.5 rating, and the unique game artwork, this is a must-buy for our Christmas list.

Rated a rare “10”, I’ve had my eye on this game since it was released earlier this year.  Another definite Christmas list item for us.

Might & Magic: Clash of Heroes, DS
Rated 8.5, I’m worried I’m missing out by not getting this game, which was awarded a Best of E3 2009 nomination for Best DS Strategy Game, and ranked as the 4th best Nintendo DS game released in 2009.

Play as Pikachu, meet other Pokemon and explore the PokePark; only rated 5.5 on Gamespot, but getting lots of positive reviews on Amazon.  Game does require a LOT of reading, so if your little one is new to reading, this may not be the game for you.

Then there’s also Pokemon Ranger:  Guardian Signs, DS.  This is the third installment in the Pokémon Ranger series.

SONIC!  We are huge Sonic fans, and I think this game is on ALL the kids Christmas lists.  Sonic Colors is a 3D and 2D game, with colored energy powered Wisps.  Dr. Eggman opens an amusement park in space.  Sonic and Tails discover Eggman is kidnapping aliens know as Wisps to harness their energy.  Sonic must save the day.

According to Wikipedia, “Sonic Colors was nominated for Best Platformer Game at GameTrailers  E3 2010 awards”, and “also nominated by IGN for Best Wii game, Best DS game and Best Platformer for their E3 2010 awards”, and “Nintendo Power gave the Wii version of Sonic Colors 9 out of 10, praising the game as “an unequivocal success”, and gave the DS version 7.5 out of 10, criticising the game’s short length.”

“Nintendo just announced a February 26 ship date in Japan for ¥25,000 (about $298). It’ll then land in the US and Europe in March for an undisclosed amount. Launch colors are aqua blue or cosmo black.”

Legend of Zelda:  Skyward Sword, wii – release date early 2011
Like 20 Christmases rolled into one.  Check out my post here.

For help with games – www.gamefaqs.com

[…] Something to think about.  But for now, I think we’ll stick with our Nintendo wii, as there are a number of new releases we’re putting on the list for […]

I want to see stuff about: